Producer/director Charles Ferguson (“No End In Sight”-2007) speaks at length with journalists, politicians, and financial insiders in order to offer a clearer picture of the economic meltdown that hit America starting in 2008. 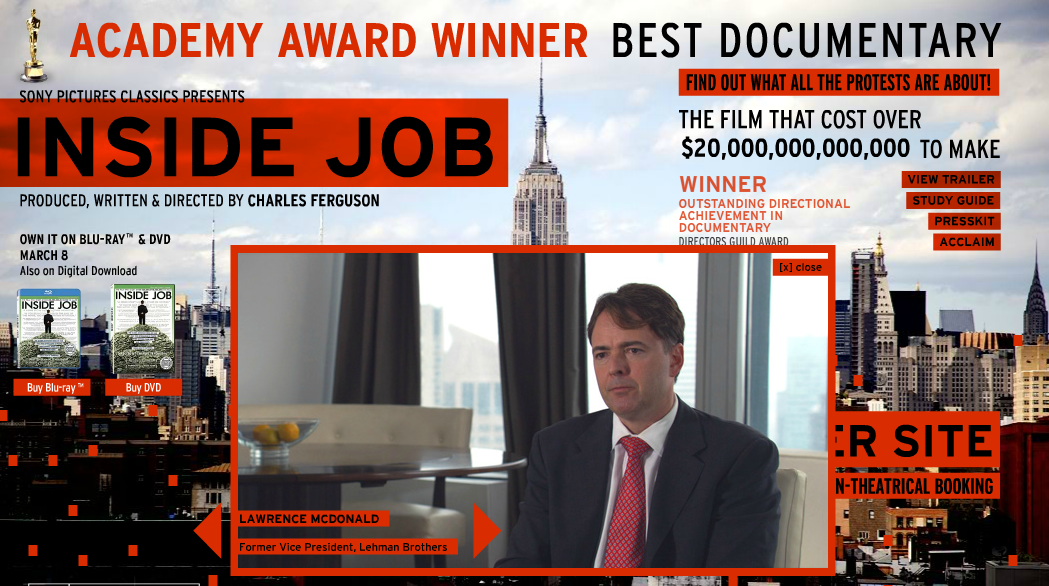 ‘Inside Job’ provides a comprehensive analysis of the global financial crisis of 2008, which at a cost over $20 trillion, caused millions of people to lose their jobs and homes in the worst recession since the Great Depression, and nearly resulted in a global financial collapse. Through exhaustive research and extensive interviews with key financial insiders, politicians, journalists, and academics, the film traces the rise of a rogue industry which has corrupted politics, regulation, and academia. It was made on location in the United States, Iceland, England, France, Singapore, and China.

The global financial meltdown that took place in Fall 2008 caused millions of job and home losses and plunged the United States into a deep economic recession. Matt Damon narrates a documentary that provides a detailed examination of the elements that led to the collapse and identifies keys financial and political players. Director Charles Ferguson conducts a wide range of interviews and traces the story from the United States to China to Iceland to several other global financial hot spots.

Academy Award winner Matt Damon narrates this unflinching look at the deep-rooted corruption that has left millions of middle-class Americans jobless and homeless as the major corporations get bailed out while paying millions in bonuses.